WiiShip is a BattleShips clone for the Wii! . Hours of fun to be had!

You can play against the computer or multiplayer (multiplayer is coming soon).

The game Battleship is a guessing game played by two people. Although popularized in the United States as a commercial board game, first published in 1931 by the Starex Novelty Company of New York under the name of "Salvo", it is known throughout the world as a pencil and paper game and predates World War I in this form. It was published by Milton Bradley Company in 1943 as the pad-and-pencil game "Broadsides, the Game of Naval Strategy".

Players place their "fleet" of 5 ships on their "ocean", hidden from the opponent's view. Taking turns, players call out their "shots" attempting to get "hits" on the opponent's ships in order to sink them. Strategy and some luck must be combined to be the first to locate and sink all 5 opponent's ships to win the game.

Load using any method. The download includes an icon and XML file for the HBC. 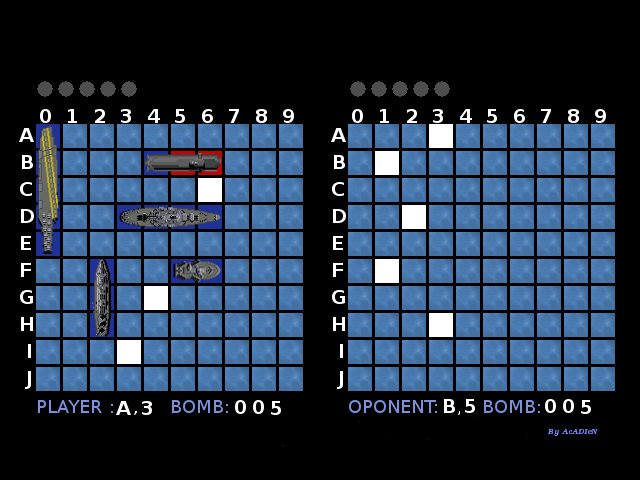 Select what boat to place on the board instead of forcing the user to put the Carrier, Battleship, Destroyer, Submarine and Patrol (in that order)

Little bug on the AI of the computer when there is vertical boat next to each other.

PSSSS: Multiplayer is done, but I have a single bug that I can't figure out, and because I don't have an USB gecko, it's kind of hard (well more like time consuming) figuring where the prob is, but stay tune, it shouldn't take long before wiiship multiplayer is release.

Wil (wii solitaire author) for his help on GRRLIB

To everyone who made source code available for their Wii applications and of course to Team Twiizers.

Hall of fame for the fastest win (less shoot) Multiplayer over the internet!

If you experience any bugs, please let me know on IRC #wiihelp.