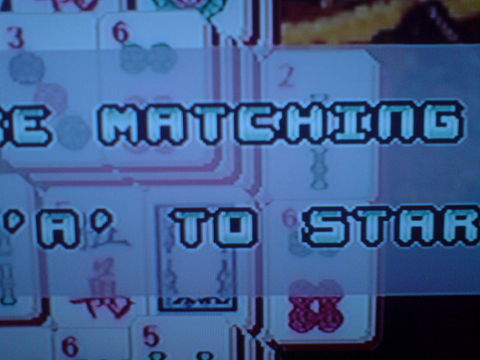 i got an unfinischable game in 2 player battle mode.

I didn't make the comment above, but I also got an unfinishable game after the game was shuffled. Then I clicked on the Hint button and it locked up the game since it couldn't find two tiles that matched. Deozaan 21:40, 12 January 2009 (UTC)

Thanks for the spot, I've fixed the hint button problem, but the shuffle problem will need a bit more digging --JustWoody 16:56, 13 January 2009 (UTC)

I noticed in this version that the top row of tiles as well as the leftmost column of tiles that are right against the edges of the screen can be difficult to see. For some reason my TV cuts off the edges of almost all homebrew (but movies and Wii games and other things displayed on the TV look fine) so I can't even see the numbers in the corners on the top row and left column. My setup is: Wii NTSC (3.3U) displayed in wide screen 480p. Deozaan 21:48, 12 January 2009 (UTC)

Did this happen in the previous version? As I forgot that I had left some code in the latest version that was meant to give a widescreen picture but only activated on a Wii set to widescreen and 480p --JustWoody 16:56, 13 January 2009 (UTC)

I don't recall it happening in the previous version. Maybe there just weren't many tile layouts that had tiles stacked so high against the edges of the screen before. I'm not sure. Deozaan 19:24, 16 January 2009 (UTC)

I was just watching my wife play a game on the spider layout. She ran out of available matches and got the end game prompt. She clicked the restart button and the game froze. We had to hold on to the power button on the Wii itself to reboot the Wii. Deozaan 01:39, 23 January 2009 (UTC)

This isn't really a bug but I wasn't sure where to put it. My wife plays this game a lot and apparently you removed some tile layouts in this version. One of which was her favorite. Do you plan on restoring those layouts in the next version or do I need to downgrade to the previous version? Deozaan 21:43, 12 January 2009 (UTC)

Yeah I got rid of the pyramid tile layout thinking that it wasn't very good, but if people like it then I can add it back in to the next release --JustWoody 16:56, 13 January 2009 (UTC)

Cheers for the comments Ensign R, I know exactly what you mean with the bug report and have just fixed it for verion 0.8 --JustWoody 18:46, 4 February 2009 (UTC)

i got a shuffle bug, 2 player versus mode, titelset "vesting", language dutch. this happned onece: no more titles, it shuffles ~ 20 times, then sais no more moves, i can hit shuffle again but results are the same. screenshot below Bitflusher 08:28, 4 February 2009 (UTC) 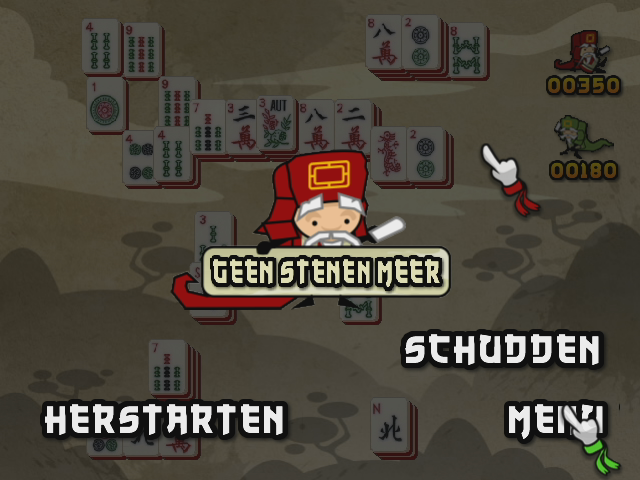 note there are possible moves in this screenshot, upper left, the two 4 titles

I think this is all tied into the general problem also highlighted above, and is not the easiest thing to fix as I have added some fairly complex algorithms around tile placement, having said that I want to fix this so will be looking at this before I release the next version --JustWoody 18:46, 4 February 2009 (UTC)
I've fixed the problems around tileset placement and these will be present in v0.8 which should be out before too much longer --JustWoody 17:22, 19 February 2009 (UTC)