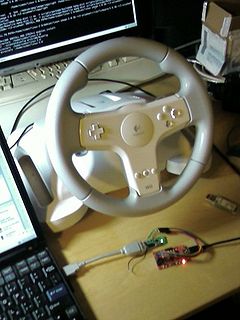 The Logitech Speed Force Wireless Wheel system uses a USB dongle to connect to the wheel using a propriatory 2.4GHz wireless link. The wheel is intended to sit on one's lap and is powered by a 'wall wart'. The wheel has a 270 degree 'swing', has D pad plus 7 buttons on the front and 2 analogue paddles on the rear of the wheel for brake and accelerator.

Supported games are (reputed to be):

This wheel is currently (Sept 2010) on clearance for less than $10, an obvious attraction to the hard-core hacker. This wheel is extremely similar to the PS2/PS3 Driving Force Wireless wheel, so the information is expected to apply to that too.

The dongle contains a Cypress micro controller and nRF24L01 transceiver, the circuit is similar to this.

The switch on the rear of the dongle is used to trigger a re-bonding, although the wireless link is not active until configured. The LED flashes initially to indicate 'not bonded' and then goes out when the link is established, it flashes briefly as data is received from the wheel.

The wheel hardware contains the nRF24L01, a ATMEGA micro, and a PWM/Full-bridge driver for controlling the motor. The micro scans the buttons mounted on the wheel, digitizes the wheel/accelerator/brake positions and sends the data to the PC/Dongle.

The dongle is a standard USB HID device. The feature port is used to configure the dongle/wireless link, the in-port reads data from the wheel and the out-port is used to send Force Feedback commands.

The dongle has the USB ID 0x046D:0xC29C, the HID descriptor is (unfortunately) corrupt.

The solution (on Linux) is to re-write the descriptor on the fly, after that the axis/buttons are recognized correctly (even though the wireless link is not active yet).

The Wheel/Dongle are configured by writing to the feature port of the USB dongle. This allows the control of the 'on-air' features, such as initiating the wireless link, controlling the RF channel/hooping sequence and RF addressing (sub-channel coding).

When first plugged in the wireless link between the dongle and the wheel is not active, the link can be 'brought up' with writing the '0xAF Command' followed by the '0xB2 Command'.

The commands take some time to action, this can be confirmed by reading back the feature port, when the command completes the MSB of the first byte will be cleared. For most commands the same data that was sent is returned, some commands return different data.

The following commands do not cause SPI activity to the nRF24L01

There are a number of force feed back codes which can be written to the USB out-port, some of these are know/understood but assistance is required to further reverse engineer the rest.

Multiple effects can be active at any time, it would appear that multiple forces are added by the wheel up to the maximum force possible.

An effect can be written to one or more slots with a single write, the selected slot for an effect is encoded into the upper nibble 1st byte of the 'command'.

The type of effect is encoded in the second byte of the out-port write, with specific settings for the effect in the further bytes. The upper nibble of the effect is OR'ed with 0x80 before it is transmitted, it doesn't appear that it makes any difference in the effect

De-associate
this is probably unintentional, the result of not correctly understanding the proper operation of the wheel.
Byte 2 - 0x_F
Byte 3, 4, 5, 6 & 7 - anything (set 0x00)

The 'simple autocenter' is not written to a slot, instead it has it's own special slot at the end of the data frame

The Force Feedback configuration is sent continuously over the wireless link, which takes the form of a 31 byte payload. These are seen on the SPI bus as they are sent to the RF24L01 output buffer (register 0xA0).

The format is as follows:

The Joystick data from the wheel is returned to the micro. These are seen on the SPI bus as reads from the input buffer (register 0x61).

The format is as follows:

A patch for enabling these wheels (with basic force feedback) is in the mainline kernel (2.6.37rc1 and above). For those using Debian/Ubuntu you can find a pre-built kernel and headers here.

I managed to get some time on a Wii with Dirt2 and get some captures of the SPI traffic to the nRF24L01 (get them here). Fairly disappointing game, as they don't appear to be doing much in the way of FF.

Looking at the data structures, they seem to be using specific 'slots' for each effect:

Apparently there is a port of LibUSB to Windows, it may be possible to produce a small application which would enable the wireless interface without the need to write a full Windows driver. Interestingly though the dongle/wheel remain bonded through a reboot, so the dongle can be enabled in Linux and then the wheel will work under XP (with the corrupted axis mapping).