What it says on the tin. This program automatically generates the XML file needed to add a homebrew app to the HBC. An eager-to-please Swing window pops up and asks you to type in all of the parameters required by the HBC. Then, click the big blue button to save a generated XML output somewhere. On Windows and Mac machines, the default OS text editor will pop up proudly displaying the XML file in all of its raw glory. 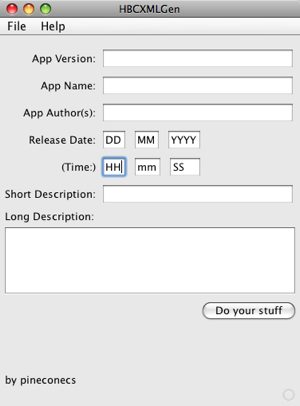 A screenshot of it running on Mac OSX

App finally (should) work! Very embarrassing error on my part.

This app has not had a very happy life. I realised that for the first day or two, NO ONE could run the app. This old lifeless version has since been replaced by a funner and more out-going version that drinks cocktails with little paper umbrellas in it. Since then the old version has retired and found itself a little place near Cornwall to reminisce about the good old days when it was wanted whilst the waves lap against the shore with hypnotic rhythm.

Java can be a tricky devil so post any problems you're having on the Discussion page with full details.

Java is one of those hotly debated topics among the programming community: it's a bit of a Marmite situation (I personally love Marmite. Others would favour eating tar for breakfast).

Java was one of the first programming languages I ever learnt, and it's because of this I have an irrational attachment to it (a bit like Mac fan-boys). But beyond this, Java was ideal for this non-CPU intensive program: it runs on (almost) any OS, it's easy to build UIs for it and it has powerful file IO classes. In fact, Java's in-built library is second to none.

As I said, I will happily provide the source upon request, but it's exquisitely boring. Most of it is generated by the IDE and the WYSIWYG editor I used to design the UI.

I've actually been quite surprised by the number of people who have downloaded this app. Since it wasn't particularly hard to make and required almost no special knowledge, expertise or ingenuity, the fact that no one had attempted such an app before-hand suggested to me that no one felt the need for it. But I'm happy as long as at least one person finds it useful (whether or not you let me know about this doesn't really matter to me: this app wasn't so much an act of generosity as it was a personal aid).

I always like to solve problems with programs, however small. An hour of my time is well invested if it saves you and me time scrambling around looking for XML tags. Obviously a template file stored somewhere on your system or simply copy-and-pasting an old XML file would be adequate, but I feel this is a somewhat more elegant solution.

Mac OSX users have the choice of downloading either the normal version or the brand new Mac OSX version. It's the same .jar file, but it's wrapped in a nice installer that puts it in your applications folder, creates and alias and checks that the JRE is installed.

The one interesting part of the source is the code which determines the OS of the host system and executes a command accordingly. In this case, it opens a text editor. If there are any beginner Java programmers who may be interested in this: don't hesitate to drop me a message on my Discussion page or on the IRC (although I'm not on it most of the time).

Also, feel free to correct any spelling errors. I am a ruthlessly scrappy typist.

Check out the Discussions page. If you're having trouble running the app, chances are someone else is too...