A Wii Error Message occurs when the Wii encounters an error. There are many error messages on the Wii that have different meanings.

An Error Has Occurred

This is a generic error encountered by a Wii caused mostly because of a dirty or damaged disc inside the Wii console. The best thing to do is check the disc for any scratches or dirt that could cause disc read errors.

More rarely, this could be a problem related to the Wii console's DVD drive being broken or damaged. Repairs might be required if this is the case. (Please add more info)

This error message is a very rare error that only seems to occur around launch. This indicates an incomplete System Menu is installed. the wii startup disk is now seen as lost media and was only on retail demo wii consoles on retail consoles the idea was scrapped by nintendo.

The System Files Are Corrupted

This error message is usually caused by a banner Brick. When the Wii Menu detects a corrupted or incompatible channel banner, it will crash to this error. More rarely, this can also be caused by editing the Wii System Menu incorrectly or deleting a vital file. If you do encounter this error and want to fix it, use AnyTitle Deleter to delete the channel with the bad or invalid banner. In the case of invalid or deleted System Menu files, launching DOP - Mii to reinstall the system menu via the Homebrew Channel or an autoboot disc can work as well. This error can also occur when installing a broken theme.

The () System File is corrupted 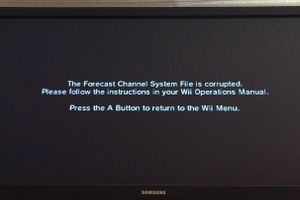 You have tried to access the address (), which is currently unavailable.

The Opera error message is caused by a corrupt settings menu or installing a System Menu Update from a disc from another region. This is called a semi-brick.

This channel can't be used.

This error shows up when you open a channel that doesn't match the system region. (For example, opening a Japanese exclusive channel on an EU wii.)

Please share your knowledge and add more information to this page.