They Do Not Die

They Do Not Die is a 2d zombie shooter with abstract visuals and a focus on customizability with an included level editor.

It is a remake of the game that I was making and had more or less abandoned on PC.

The game also got a sequel, They Do Not Die 2. 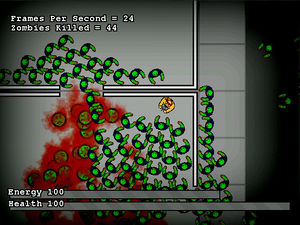 This is an enhanced version of They Do Not Die v1.0, which includes custom people graphics, a Homebrew Channel icon, and a new custom map, Zombie Death Maze (Navigate the zombie-infested maze and make it to the Safe House at the end!)