GCN MemCard Recover is a utility that can recover files from corrupted or reformatted GameCube memory cards.

In order to recover files from a GCN memory card, you will first need to dump the memory card image to a computer-readable format using a Nintendo Wii. Two programs are available for this purpose:

GCMM is more up-to-date and has more functionality, so GCMM is recommended.

You will need an SD card or USB mass storage device in order to dump the memory card.

See the GCMM page for information on how to dump a raw image of a GCN memory card.

Once the memory card image is dumped, you can open the image file in GCN MemCard Recover:

GCN MemCard Recover will open the image file. If there were any save files that were normally visible on the GameCube (e.g. the card was reformatted and reused), they will appear in the list.

To search for files deleted and/or lost due to reformatting or file system corruption, click the "Scan" button in the Memory Card Details toolbar. GCN MemCard Recover will scan each block of the memory card image to see if it can find matches for known files. Once it's finished scanning, any files it found will appear in the list highlighted in yellow.

Highlight the file(s) you want to extract, then click the "Save" button. The file(s) will be saved in GCI format, which you can then restore onto the memory card using GCMM.

GCN MemCard Recover works by searching through the file data instead of using the file system's directory tables. Unfortunately, this means that file recovery has a few limitations:

1. If files are heavily fragmented, GCN MemCard Recover may not be able to successfully recover them. If this happens, the file will appear to be extracted successfully, but attempting to load the save file in the game will result in either a "file corrupted" error or a crash.

GCN MemCard Recover does support verifying the checksums of some files, which is indicated by the icon in the rightmost column:

Note that checksums are only currently checked for "lost" files (that is, files found using the scanning algorithm). Files that are visible on the card normally are not checked, and hence won't show any icon in the rightmost column.

2. Some games don't store the game description in the first block of the file. This includes "Mario Kart: Double Dash!!" and "The Legend of Zelda: Twilight Princess". Due to limitations in the current scanning engine code, these files cannot be recovered yet. Support for these files will be added in a future version.

3. Games that have multiple slots but don't have a slot identifier in the comment section will all be restored with the same filename. This includes "Animal Crossing", so if e.g. multiple "Animal Crossing" save files are restored from the memory card, they will all have the same name, so you can't restore them to the same card. This will be fixed in a future version.

4. The included databases are far from complete. If you have save files for any games not currently supported by GCN MemCard Recover, please send me copies of the GCI files so I can add support for these games to the databases. 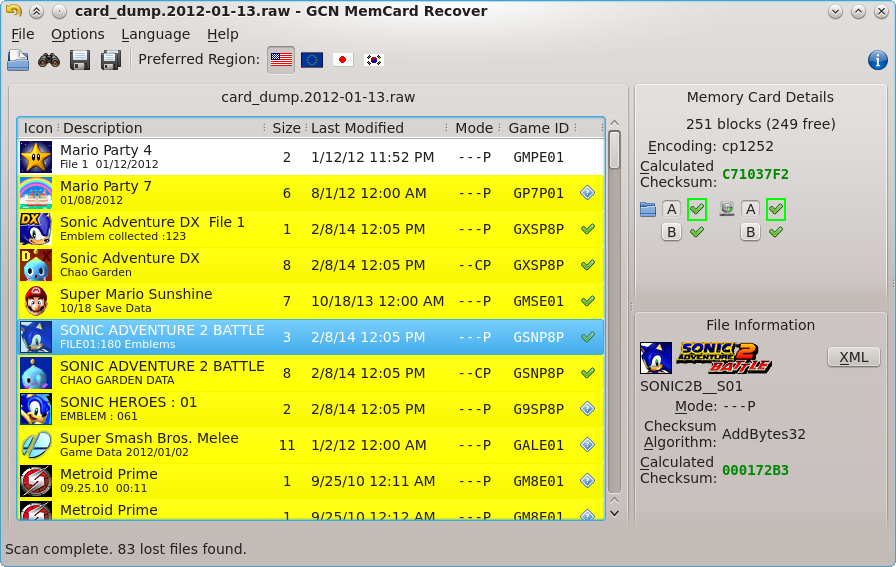 Database statistics in this release:

Database statistics in this release: