Why? Because it is simply possible to do and a fun experience too! I got the trigger to start this at an information evening at my son's school. A student of de 'hogeschool voor de kunsten' was telling about game design. A girl asked him if it would be possible to program games for the Nintendo Wii. That question triggered me because the month before I softmodded my Wii.

So I started looking for information about creating Wii homebrew applications. I learned that the devkitpro development environment could help me with it. So I decided to give it a try and to recreate a game that I programmed in 1983. At the age of 13 I programmed a relatively simple version of the Game and Watch Donkey Kong Jr for the TRS-80 home computer. I thought it would be fun to recreate it for the Wii.

This is the result and I hope you like it. 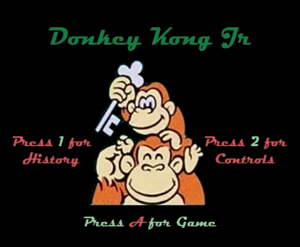 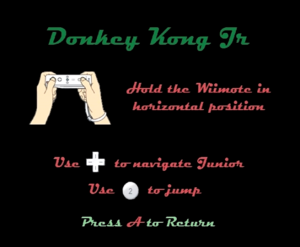 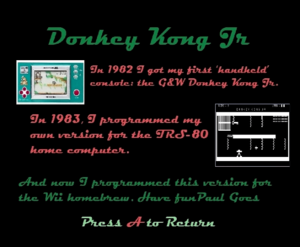 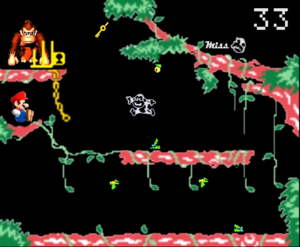 I created a channel forwarder WAD to add the Donkey Kong Jr game to the system menu. The WAD is included in the wad-folder in the download ZIP.

For those that are interested I also created a making of video. This video shows the different stages that the game has gone through during development.