The Wii Motion Plus starts off at register 0xA60000 instead of register 0xA40000, because it has its own extension port on the back allowing a Nunchuk for example to be plugged in along with the Wii Motion Plus. BUT it changes to 0xA40000 once it is activated by writing 04 to 0xa600fe.

The 32 bytes from 0x(4)a60020 are, as usual, calibration information, described as follows:

Writing 0x04 to 0x(4)A600FE activates the MotionPlus as the "active" extension. This does 3 things (with no additional initialization):

Writing 0x55 to 0x(4)A400F0 deactivates the MotionPlus, and activates the Nunchuk or other extension plugged into the back of the Motion Plus. It does these things (with no additional initialization):

It is possible to read from both MotionPlus and an extension controller at the same time by activating the MotionPlus in one of the pass-through modes suggested by DogP. When activated, this interleaves extension controller data with MotionPlus data on every other read. Data passing through are modified to make room for 3 bookkeeping bits. Two pass-through modes are currently known, one with modifications adapted to the Nunchuck, and one with modifications adapted to the Classic Controller (but suitable for Guitar, Drums, or Turntable).

When not activated, the MotionPlus is detected by regular polling (every 8 seconds or so) of 0x(4)a600fe. Writing 0x55 to 0x4A400F0, then 0x00 to 0x4A400FB (the standard extension init, works fine even with no extension) re-activates the standard extension, if any, plugged into the MotionPlus pass-through port. The development version of the CWiid driver currently implements this method (without automatic 8 second checks) on the motionplus branch. Additional information on MotionPlus workings and implementation requirements are at http://abstrakraft.org/cwiid/wiki/MotionPlus.

The Wii Motion Plus reports its information as 6 bytes of data, readable at 0x(4)a40008 (or 0x(4)a40000 in some cases) and streamable using Data Reporting Modes that include Extension bytes (unused bytes are filled with 0x00). The data is packed into the six bytes as follows:

While the Wiimote is still, the values will be about 0x1F7F (8,063), although it is best to calibrate for a few seconds every time you start, to get the actual zero values.

Extension connected is 1 when an extension is connected to the MotionPlus extension port.

The correct way to measure orientation is to maintain a rotation matrix (or alternatively a quaternion) of the current orientation (relative to gravity), and update it each time you get a gyro reading. It will drift a little, so you should reset the matrix's pitch and roll (but not yaw) with the values from the accelerometers whenever the accelerometers and gyros indicate no movement. After significant rotation, you should reset the matrix's yaw to zero when the Wii Remote is pointing near the middle (horizontally) of the sensor bar.

The combination of 3 linear accelerations with 3 angular rates allows what Nintendo refers to as 1:1 motion tracking, which is another way of saying 6DOF (degrees of freedom) over a short time. It's only valid over short times because of the integration involved to convert accelerations and rates into positions (input errors, when integrated, blow up over time).

In addition to providing yaw, the gyros also allow the software to tell the difference between orientation and acceleration, which are difficult to tell apart from the accelerometers which measure a mixture of both.

Wii Motion Plus Documentation at AiLive

In this mode, MotionPlus data and modified Nunchuck data are interleaved, you can retrieve one set of data every 3ms (one wm+, one nunchuck, one wm+ and so on). First 6 byte are the motion plus, send a byte 0, wait some time that WM+ retrieve and overwrite its buffer, and now read other 6 byte that are the nunchuck data. If you don't wait some time (3ms between every request), WM+ give incorrect data, mixing byte with nunchuck. The data format for the Motion Plus does not change, but the data format of the nunchuck is different than the normal way:

Note that BDL and BDU are moved, and each axis of the left joystick loses its least significant bit. Extension connected is usually 1. 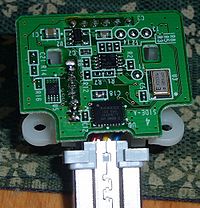 Wii Motion Plus, circuit board, top 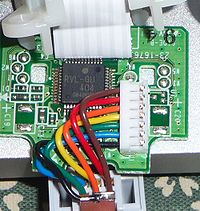 Wii Motion Plus, circuit board, bottom

The Wii Motion Plus contains two gyro sensors: A dual-axis gyro by InvenSense, the IDG-600(pitch and roll), and a single-axis gyro by EPSON TOYOCOM labelled X3500W (yaw).