From WiiBrew
< Wiimote
Jump to navigation Jump to search

The Wii Remote has two input features that are controlled directly by the Broadcom chip: a Three-Axis Accelerometer and 11 Buttons. Additionally, it has an IR Camera with an object tracking processor, and an expansion port that allows for external input features such as those contained in the Nunchuk and the Classic Controller (see Extension Controllers).

The Wii Remote has 11 buttons on its front face, and one trigger-style button on the back. Of these, the Power button is special and is treated differently by the Wii Remote. All the other buttons are independantly accessible through a two-byte bitmask which is transmitted first in most Input Reports. A button will report a 1-bit if pressed, or a 0-bit otherwise. By default, these are sent only when the state of any button changes, in Data Reporting Mode 0x30. However, the Wii Remote may be configured to report the state of the buttons continuously; see Data Reporting.

The Wii Remote has 11 buttons that are used as regular input devices: A, B (trigger), a 4-directional D-Pad, +, -, Home, 1, and 2. These are reported as bits in a two-byte bitmask. These are the assignments, in big-endian order:

When the Wii Remote is turned off, pressing the Power button will attempt to wake up the Wii that is synchronized to it. The mechanism for this is unknown, and it is handled entirely within the Wii's bluetooth module. When the Wii Remote is turned on and connected to a host, pressing and holding the Power button for a few seconds will turn the Wii Remote off and request disconnection from the host. The disconnection reason included with the Baseband (ACL) disconnection request indicates that the power button was pressed: REMOTE DEVICE TERMINATED CONNECTION DUE TO POWER OFF (0x15). Another possible value is REMOTE DEVICE TERMINATED CONNECTION DUE TO LOW RESOURCES (0x14), which indicates that the Wii Remote performed a controlled shut down due to a low battery condition.

The sync button is hidden under the battery cover. When the Sync button is pressed, the Wii remote will disconnect from whatever it is currently connected to, make itself discoverable, and accept pairing or connection requests for exactly 20 seconds (regardless of how long the button is held down for).

The "syncing" of a Wii Remote involves standard Bluetooth pairing. When the Sync button is pressed on the remote, it will accept pairing requests. The required PIN is the hosts's Bluetooth address, backwards (last byte first), in binary (6 bytes). Most current Bluetooth implementations don't deal with this correctly, as they usually consider the PIN to be a regular null-terminated ASCII string (no 00 bytes, etc) and most Bluetooth addresses will contain null bytes. Any further steps that need to be taken after the Wii Remote is paired have not been reverse engineered yet.

Once the Wii Remote is synced, when a button is pressed, it will actively seek out its paired host and try to connect to it, instead of the other way around. Establishing a connection can be done on PSM 0x11 for writing and PSM 0x13 for reading using the Bluetooth L2CAP protocol. 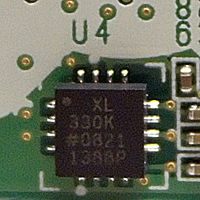 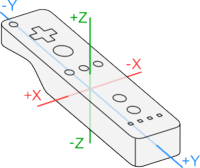 The Wii Remote includes a three-axis linear accelerometer located on the top suface of the circuit board, slightly left of the large A button. The integrated circuit is the ADXL330 (data sheet), manufactured by Analog Devices. This device is physically rated to measure accelerations over a range of at least +/- 3g with 10% sensitivity.

Note that X has 10 bits of precision, while Y and Z only have 9. For consistency, they are assumed all to have a 10-bit range and the LSB is always set to zero for Y and Z.

In Data Reporting Mode 0x3e/0x3f, the accelerometer data is spread over two reports:

In this mode, the LSBs are not available. Instead, X and Y acceleration is reported as a single byte, and the Z value is encoded in the unused bits of the BB BB Buttons data as follows:

The Wii Remote includes a 128x96 monochrome camera with built-in image processing. The camera looks through an infrared pass filter in the remote's plastic casing. The camera's built-in image processing is capable of tracking up to 4 moving objects, and these data are the only data available to the host. Raw pixel data is not available to the host, so the camera cannot be used to take a conventional picture. The built-in processor uses 8x subpixel analysis to provide 1024x768 resolution for the tracked points. The Sensor Bar that comes with the Wii includes two IR LED clusters at each end, which are tracked by the Wii Remote to provide pointing information. The distance between the centers of the LED clusters is 20 cm (as measured on one unit).

The IR Camera is enabled by setting bit 2 on output reports 0x13 and 0x1a:

The first enables a 24MHz pixel clock on pin 7 of the camera. The second pulls pin 4 low - probably an active-low enable.

The IR camera has an effective field of view is about 33 degrees horizontally and 23 degrees vertically (as measured on one unit). With the IR-pass filter intact, 940nm sources are detected with approximately twice the intensity of equivalent 850nm sources, but are not resolved as well at close distances. If the filter is removed, it can track any bright object. However, the IR filter referred to here is not only the dark plastic window of the wiimote but also a teensy slab of dichroic-coated glass inside the camera module. One may operate the wiimote having installed neither, one or the other, or both filters.

The following procedure should be followed to turn on the IR Camera:

The Wii preforms these steps slightly different, differences in bold:

Adding bit 0x02 to reports 0x13 and 0x1a is a request for acknowledgement (if set, wiimote will respond with report 0x22).

Sensitivity is controlled by two configuration blocks, 9 bytes and 2 bytes long. The following settings are known to work:

The IR Camera can return different sets of data describing the objects it is tracking. When the IR camera identifies an object, it assigns it to the first available object slot. If an object moves out of view, its slot is marked as empty (returns 0xFF data), but other objects retain their slots. For example, if the camera is tracking two objects and the first moves out of view, the data returned will be [empty, second object, empty, empty]. With more than four objects visible, the camera is prone to rapidly switching between some of them. This could allow perception of more than four objects, at a reduced response speed and reliability.

The data format MUST match the number of bytes available in the Reporting Mode selected. Even choosing a mode with space for more bytes than necessary will not work, it has to be an exact match.

In Basic Mode, the IR Camera returns 10 bytes of data corresponding to the X and Y locations of each of the four dots. Each location is encoded in 10 bits and has a range of 0-1023 for the X dimension, and 0-767 for the Y dimension. Each pair of dots is packed into 5 bytes, and two of these are transmitted for a total of 4 dots and 10 bytes.

This is the data format for a pair of objects:

In Extended Mode, the IR Camera returns the same data as it does in Basic Mode, plus a rough size value for each object. The data is returned as 12 bytes, three bytes per object. Size has a range of 0-15.

This is the data format for each object:

In Full Mode, the IR Camera returns even more data, 9 bytes per object for a total of 36 bytes for all four. The data is split up between two input reports of 18 bytes each (see Data Reporting Mode 0x3e/0x3f). The first three bytes of each object are the same as the extended mode, and are followed by the bounding box of the pixels included in the blob along with a deeper intensity value. The data format of each object is: