From WiiBrew
(Redirected from Talk:Title Database)
Jump to navigation Jump to search 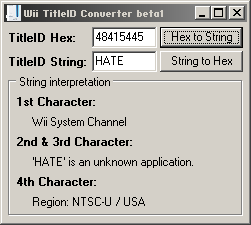 Done. First time I ever edited a wiki, hope I did it right... Any suggestions from anyone on how I addressed the fact Exxx is the only titleid that has multiple consoles, please comment.smyers75 22:21, 3 February 2010 (UTC)

Attempting to edit the page just provides the following error message: `Forbidden. Contains contacts. Message seems to be spam.` Unsure if this is due to my account being new, or if something on the page is being detected as contact information and thus being stopped by a spam filter (which should probably be fixed, since it completely blocks all edits to the page).

Did you add any links or email addresses? That doesn’t sound like something that would happen from being new, but sometimes the spam filter is confusing. Hallowizer (talk) 17:51, 12 May 2022 (CEST)