From WiiBrew
(Redirected from Talk:Loadmii)
Jump to navigation Jump to search

I don't get the "no traces" argument. Care to elaborate how this leaves less traces than something directly started from HBC or the Twilight Hack? --Drmr 20:32, 22 January 2009 (UTC)

I beleive that when started from the Twilight hack it won't install anything on your Wii, and in the message board, only Zelda Twilight princess will show.

Not trying to be rude, but that's not an answer to my question. Again, between "Loadmii" to load an application, and running the same application directly by Twilight Hack, how does running it from "Loadmii" leave less traces? --Drmr 09:42, 23 January 2009 (UTC)

Loadmii is not comparing itself to twilight hack, for it cannot replace the TP hack. Indeed you require TP hack (or equivalent loader, modchip etc) to start loadmii. So it is of course as you said, no less tracable than TP hack, BUT i can't see anyone claiming this at all! What people probably mean to compare it to is the HBC. After all twilight hack only loads boot.dol, loadmii and HBC allow you to browse between multiple applications OSW 12:13, 3 February 2009 (UTC)

Hi, i really like this loader, seems a little bit slow on larger .dols

Add a setting, maybe on root SD or something that allows the Icon to show up, and or short description of meta file

SMB is good, maybe more stream paths in shares.ini is that allowed? i haven't tested...

Add DVD Support (Not a big todo though)

These are what i believe are needed, to make it topdog! thankyou If you need any testers, i test pretty thoroughly :) djdynamite123 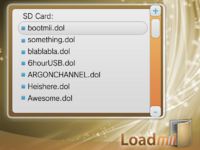 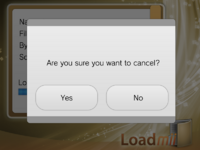 "I start up Loadmii and the Wii Remote works. I start up Snes9xGX and the remote refuses to sync up again. I also have this problem with VBAGX. Xnamkcor

That's a problem with LoadMii not reloading an IOS, not with my apps. You will find all newly released apps will break until LoadMii is fixed. --Tantric 17:18, 15 October 2009 (UTC) User talk:Tantric#SNES9XGX and VBAGX 4.12 Don't Sync With My Wii Remote Xnamkcor —Preceding undated comment added :03, 15 October 2009 (UTC).