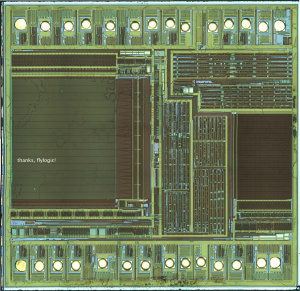 The only data contained in the GameCube boot ROM on the Wii is two fontsets (one Latin, one Japanese). They are compressed using a proprietary format (Yay0), and generally only used in GameCube mode.

Real-Time Clock (RTC) is 32-bit value, counting time intervals in seconds. To get the real time (seconds since January 1st, 2000 12am) add the counter bias saved in SRAM. Setting the time via the System Menu affects only this bias; while it is possible to change the time counted by the RTC, the System Menu does not do this.

This chip appears to also have some connection with the disc drive, as it stores flags for when the eject button is pressed (0x01010101) and when a disc has been changed (0x02020202), which the System Menu depends upon for the disc channel to actually detect changed discs. These flags are accessed over EXI, with reads using 0x21000800 and writes using 0xa1000800. Implemented in Dolphin by this commit.