Note to those using network play: the network connection broker requires the latest version of Frodo, so please upgrade if you plan to use the network support!

c64-network.org is a Commodore 64 emulator written by Christian Bauer (http://frodo.cebix.net). It was ported to the Wii by Simon Kagstrom, and many C64 games are fully playable on the Wii with it. So go ahead and beat your friends in International Karate, Boulder Dash or Bomb Jack. This version is not the same as Troy Davis implementation, but Troys work is available in a branch in the subversion tree.

The emulator works in 480i, 480p and 576i mode. The emulation itself is not perfect, so not all games will run under Frodo. Unfortunately, I cannot do very much about this since I haven't written the emulator - just ported it. If you have multiple versions of a game, try each of them as often at least one will work.

Put .t64, .d64, prg or p00 files in /frodo/images on your SD card or in any directory on an usb fat disk (in the latter case you should enable the relevant option). The in-game menu allows you to insert disks/tapes, load them and configure the display, joystick ports etc. Saves will be stored on the SD card. You can save and load game state. When you save the game state also some preferences are saved in the state (joystick buttons, screen format, joystick port, 1541 emulation, rumble). The whole set of preferences is saved from the main in-game menu and it is loaded on Frodo start-up. Wiimote 1 is by default the joystick in port 1 and wiimote 2 the joystick in port 2, but you can swap this. If rumble is enabled, the wiimote rumbles each time the fire button is pressed. You can also load games from your computer through SMB protocol. You should configure and activate the connection in the network menu. See the tinysmb page for additional information and troubleshooting.

These directories and files are necessary for Frodo in SD Card: 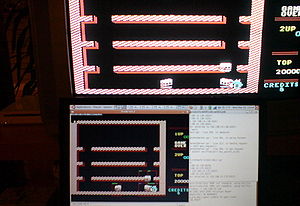 Play Bubble bobble over the network.

From version 9 onwards, Frodo/Wii supports playing games over the Internet. Traffic is completely peer-to-peer, but connections are handled through a third-party server at c64-network.game-host.org. This allows players to find each other, but also NAT-traversal. To play over the network, follow these steps:

To build Frodo, install devkitPro and SDL-Port and then run

in the source directory. You can also build for the host, which is useful to test changes which are not Wii-specific (the menu etc still works). To do this, run

The binary will be named Src/FrodoSC. I run on Ubuntu Linux, and you need to install the libsdl-ttf2.0-dev and libsdl1.2-dev packages there to build for the host. I don't know how to build it on Windows and other systems.

Please report issues and feature requests in the frodo-wii issue tracker on Github.

Holger Eilts has made a version with better menu layout, alternative USB keyboard support, screenshots and the ability to load files within D64s directly. I'm working on integrating it in the trunk, but for now you can test it here:

It's based on v8 and therefore does not have network support.

Note: More up-to-date versions may be found at http://frodo-wii.googlecode.com/

Frodo is GPLv2. I've always liked the "PostcardWare" concept though, so if someone likes the emulator, send a postcard to