Difference between revisions of "Wiimote" 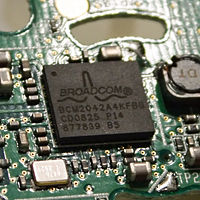 Broadcom BCM2042 in a Wii remote

The Wii Remote (informally known as the Wiimote) is the Wii's main input device. It is a wireless device, using standard Bluetooth technology to communicate with the Wii. It is built around a Broadcom BCM2042 bluetooth System-on-a-chip, and contains multiple peripherals that provide data to it, as well as an expansion port for external add-ons. The Wii Remote uses (and, at times, abuses) the standard Bluetooth HID protocol to communicate with the host, which is directly based upon the USB HID standard. As such, it will appear as a standard input device to any Bluetooth host. However, the Wii Remote does not make use of the standard data types and HID descriptor, and only describes its report format length, leaving the actual contents undefined, which makes it useless with standard HID drivers (but some Wiimote Drivers exist). The Wii Remote actually uses a fairly complex set of operations, transmitted through HID Output reports, and returns a number of different data packets through its Input reports, which contain the data from its peripherals.

Reverse engineering and documenting all of the Wii Remote's features is a work in progress. Here are the known features and their status: 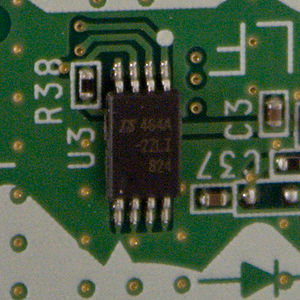 There is a 128kbit (= 16kB) EEPROM chip (Data Sheet / Full EEPROM dump from a sample Wii Remote) in the Wii Remote. Part of its contents include code for the built-in microcontroller, and a generic section which can be freely read and written by the host. This section is 0x1700 bytes long, and part of this memory is used to store the Mii Data. It can be accessed by reading from/writing to addresses 0x0000-0x16FF in the Wii Remote's virtual memory space; in the actual EEPROM chip, the data is located at 0x0070-0x176F.

The firmware stored in the Wiimote has been disassembled.

The BCM2042 microcontroller built into the Wii Remote includes a large 108kb on-chip ROM section for storing firmware. If the EEPROM chip really contains code for the BCM2042 then this was probably done to make firmware updates possible, so there might be a way of accessing the other parts of the EEPROM via Bluetooth as well. From the BCM2042 Product Brief: "ROM-based design eliminates external flash memories; Flash option offered to support feature development".

On a virgin Wii Remote, acquired separately (not bundled with a Wii), that has never communicated with any device (except the PC used to dump the memory contents), most of the memory is blank (0x00). However, the first few bytes contain some information:

This can be better visualized as two sequences, each one repeated twice:

These are two blocks of calibration data (for redundancy), where the last byte of each is a checksum (all prior bytes plus 0x55). Nintendo's libraries will only use a calibration block if its checksum is correct, falling back to the second one if the first one is incorrect, and falling back to default values otherwise.

The first block contains calibration data related to the IR camera: the position of 4 reference values. Nintendo's code uses this to compute a center offset, scale, and possibly an angle offset. It also looks like the values could appear in any order; code exists to check for values in each quadrant (below and above x=512 and y=384).

The four bytes starting at 0x0016 and 0x0020 store the calibrated zero offsets for the accelerometer (high 8 bits of X,Y,Z in the first three bytes, low 2 bits packed in the fourth byte as --XXYYZZ). The four bytes at 0x001A and 0x24 store the force of gravity on those axes. The byte at 0x1e and 0x28 seems to be unused, but apparently used to contain flags related to the speaker volume and the rumble motor (Nintendo games will print a debug message related to it but do not seem to use the value elsewhere). On all checked remotes, that byte has been 0x40.

In contrast to the data at 0x0000, this data seems to differ in only a few bytes between different Wii Remotes.

Known memory ranges are listed below.

The top byte of the address is unused, which means memory is mirrored every 0x10000 bytes. Reading from unused addresses where the low 16 bits are >= 0x1700 will result in error returns.

The Wii Remote has several memory mapped register spaces corresponding to different peripherals in it. These include the Speaker, Extension Controllers, and the IR Camera.

The peripheral to access is selected by the first byte of the address, and the lower 16 bits specify the register to access within that peripheral. The lowest bit of the high byte is ignored, which means every peripheral is mirrored at its address + 0x10000. Known peripherals are listed below:

Most of these are also mirrored across the high bits of the individual peripheral. For example, the second byte of the address is ignored in the Extension controller address, which means any address of the form 0xA4xx00 will work (as will 0xA5xx00).

There are four blue LEDs on the front face of the Wii Remote. During discovery and before initialization, these LEDs blink at a fixed rate. The number of blinking LEDs is proportional to the battery voltage, indicating battery charge (all four are lit for newly charged batteries, and only the first is lit if the batteries are low and should be replaced).

During gameplay with the Wii, one LED is lit to indicate the player number assigned to the Wii Remote. However, the LEDs are independently controllable by the host, and can be set to display any pattern. They can also be modulated at a moderately high speed, enabling some brightness control at the cost of a lot of Bluetooth bandwidth. Sigma-delta modulation works reasonably well for this.

The LEDs can be controlled by sending a report with ID 0x11:

Turning off all LEDs for an extended period of time is discouraged, as it might lead the user to believe the Wii Remote is turned off and disconnected, when in fact it is active.

The LEDs are surface mount parts, driven at 2.66 VDC.

The Wii Remote includes a rumble feature, which is implemented as a small motor attached to an off-center weight. It will cause the controller to vibrate when activated.

The rumble motor is primarilly controlled via the report with ID 0x10:

However, this will also have the side-effect of turning off all LEDs. The rumble bit needs to be set properly with every single report sent, to avoid inadvertently turning the rumble motor off.

Different photos of the rumble motor hardware show different markings. One example is SEM 8728DA. The Wii Remote drives it at 3.3 VDC and it draws 35 mA. It would be reasonable to think that the rumble motor could be removed and the motor replaced with another device with equal voltage and equal or less current draw.

The Wii Remote has a small low-quality 21mm piezo-electric speaker, used for short sound effects during gameplay. The sound is streamed directly from the host, and the speaker has some adjustable parameters.

The speaker is controlled by using three output reports, together with a section of the register address space of the Wii Remote.

LL specifies the data length, shifted left by three bits. The DD bytes are the speaker data. To fullfill the report length requirements, the data must be padded if it is less than 20 bytes long. Sound data must be sent at the proper rate.

The following sequence will initialize the speaker:

7 bytes control the speaker settings, including volume. The full purpose of these bytes is not known, but the following values seem to produce some sound:

This configuration can be used to play 4-bit ADPCM sound at 3000Hz:

This configuration can be used to play 8-bit PCM sound at 1500Hz sample rate:

It looks like the best compromise between sample rate and slow bluetooth chipsets / drivers is playing 8-bit PCM at 2000Hz, so a new 20-byte chunk of audio data is sent every 10 milliseconds.

The Wii Remote can use multiple sound formats at multiple sampling rates. PC drivers currently seem unable to keep up with the higher rates.

The 4-bit ADPCM is Yamaha ADPCM (for example, as implemented in ffmpeg).

8-bit signed PCM mode works, but when in 8-bit mode the sampling frequency must be made so low that the audio quality is pretty bad.