Project Mod is the working title for a physics sandbox game. The main inspiration is Garry's Mod and its Wiremod addon. Long term goals include robotics sensors, virtual microcontrollers, and stable internet play.

Physics is provided by the excellent Open Dynamics Engine, with just about everything else written from scratch in C++. The PC version had a few weeks of work in it when I thought Wii support would be a cool idea. The game engine is currently being redesigned for Linux, Windows, and Wii support by a combination of tricky Makefiles, conditional compilation, and lots of abstraction. Source and binaries will become available once I get basic client/server support and I get another hard drive to stick in my server machine.

This is what I had going in the abandoned PC-only engine: 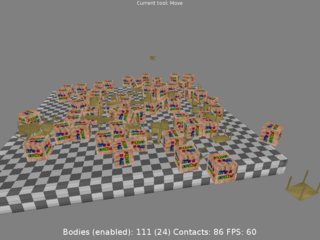