Difference between revisions of "Playstats"

A utility to analyse the play history on the Wii (shown under Today's Accomplishments on the Wii Message Board). Show such stats for each game/channel, including total time played, total number of times played, average time played, first and last time played. 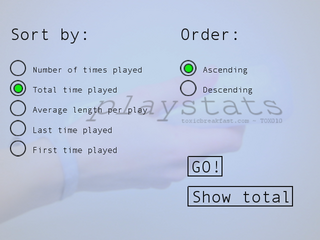 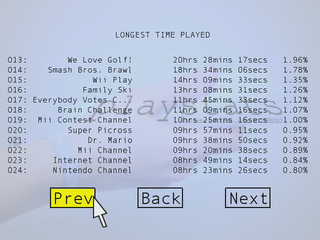 What's the point of this?

It's only a curiosity. I like to see what games I haven't played in a while and how long other games took to complete. I also found it interesting to unravel some of how the Wii stores it's messageboard data. If you do most of your stuff through the Homebrew Channel or other non-official channels and don't play many official games then it won't give you very interesting results.

Can you get it to show the apps loaded through HBC?

Unless I've missed something, the HBC does not log play records so there is no way to retrieve this info.

I get nonsense stats!

Yes, this is a known issue for some people. It won't be fixed it unless any affected people can send me dumps of their messageboard files or else go through the source and fix it themselves.

I get jumbled up titles!

Less prevalent than the issue above but the same answer applies.

How can I send you my messageboard file

I need a dump of (isfs:)/title/00000001/00000002/data/cdb.vff This is a 20MB file so preferably please upload it somewhere and send me a link to chris(swirly thing)toxicbreakfast.com but if this is a problem, zip it up and try emailing it to me. To extract this file I suggest using Fs_browser or FTPii although these apparently will not extract the file on system menu 4.0; I do not know if it is possible with another application.

Why will it not show stats for channels loaded through Preloader or Bootmii?

The system menu is bypassed here so the Wii does not log this information on the messageboard; consequently there is no way to get stats for this.

Can you add the ability to delete playlogs/reset the stats?

This involves editing the messageboard, which is not totally understood. Get this wrong and the messageboard (and consequently the system menu) will not load and you have a brick. Now we have some form of brick protection, someone might want to have a go at this but I have no interest in doing so. Incidentally, deleting messages will not free up any blocks for installing channels; the messageboard is fixed at 20MB.

How about a pie chart?

I did think about this but was too lazy. Maybe later.