Nowell is an open-source homebrew for the Drunken Coders Winter Compo, it's a 2D shoot-em-up vertical scrolling. I use SDL interface to handle graphics and wiimote.

Some websites put Dovoto as submitter and coder, but it's wrong, Dovoto has nothing to do with this game. 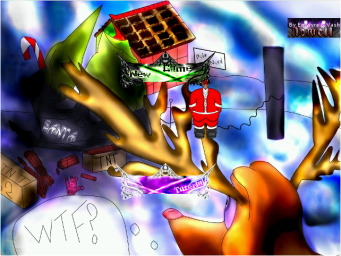 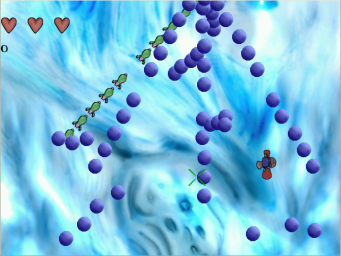 I fixed the crash that version 1.01 had when you selected "tutorial" on the start screen -- it was looking for a bmp file that didn't exist. I hex edited the elf file so it now looks for the jpg instead.

Then I re-compressed the background jpeg files and ogg files and reduced the size of this app by 15 meg! It now only takes about 10 meg on the SD card (before it was 25 meg).

And while I was repackaging everything into a nice zip file, I went ahead and improved the "tutorial" screen, slightly edited the victory screen (it said "loading"), and updated the meta.xml file.

I didn't have permission from anyone actually involved with the game to do any of this :P

But I think it's a fun little drunken game anyway.... Merry Christmas!

First you need the libxml archive, see this page for installation : libxml

- "This night will be the last for the gramps. No matter how I'll show to all of them how a true Santa must be !

You have found this piece of paper in your sandwich two days before Christmas... And you don't really know why but you want to think about this disgusting paper with more serious than the greatest idiot of Earth. Take your Flying_Snow_Board and your Cannon to defeat the imposter and save Christmas ! -

Have fun in Nowell, a Shoot them up ;)

Thanks to people on #wiidev channel for their help.

control the cursor with wiimote
click on button A

press any button to return on menu