Lifemiiwii is a 3D version of the Conway Game of life, designed by the britain mathematic John Horton Conway.

The game made its first public appearance in the October 1970 issue of Scientific American, in Martin Gardner's "Mathematical Games" column. From a theoretical point of view, it is interesting because it has the power of a universal Turing machine: that is, anything that can be computed algorithmically can be computed within Conway's Game of Life.[2][3] Gardner wrote:

The game made Conway instantly famous, but it also opened up a whole new field of mathematical research, the field of cellular automata ... Because of Life's analogies with the rise, fall and alterations of a society of living organisms, it belongs to a growing class of what are called 'simulation games' (games that resemble real life processes)

Lifemiiwii is running in a virtual world of 30x30x30 cells. In this world cells live or die depending on configurable simple rules through a four-digit number. By default the program starts with the configuration 4555. In this number first two digits dictate the fate of living cells. First one indicates the minimum number of neighbors living necessary for the cell does not perish from malnutrition. Second one indicates maximum which can be had for not stymied by overpopulation. The third and fourth digit govern the fate of dead cells. The third indicates the minimum number of neighbors who have the cell to come alive, and the fourth, the maximum number of neighbors that must be alive to cell comes alive. 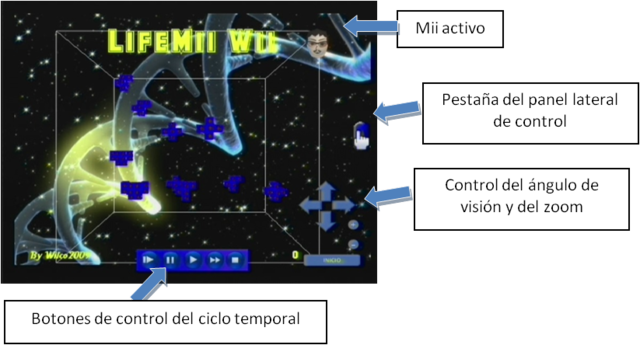 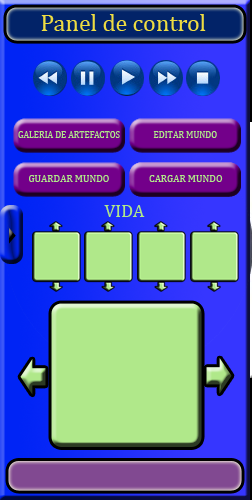 Artefact galery screen let you to view, select, rename or edit one of designed artefacts to use in your world. 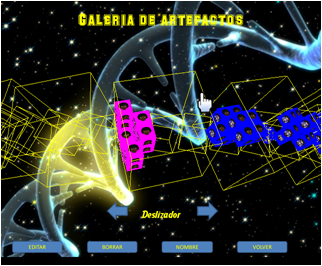 Artefact Editor can be accessed through Artefact Gallery, and is used to modify existing artefacts or create new ones. In the left side you can find a cube with a grid, who let us to add or remove cells to our artefact. At right you can preview the result rotating to view it from every point of views.

Pressing "Volver" we can return to the artefact gallery. 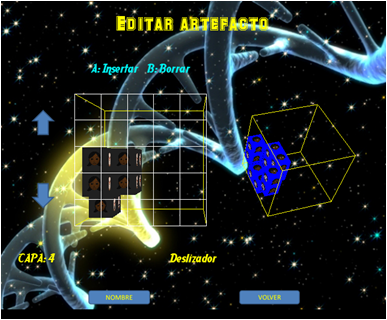 With World Editor you will be able to edit your word adding, moving or rotating artefacts. 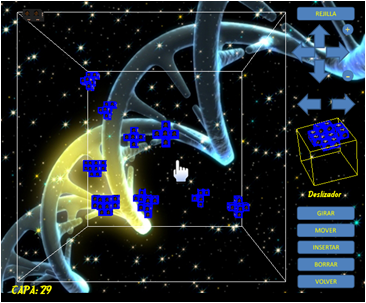