Difference between revisions of "BootMii"

BootMii is a system designed by Team Twiizers to enable complete low-level control of the Wii. It allows the Wii to be controlled mere moments after the On button has been pressed, before any IOS has been loaded and before the NAND filesystem has been read.

BootMii is comprised by four pieces of software:

Both mini and bootmii-ppc must be present in order to draw a user interface, because the Starlet cannot directly access the Video Interface.

BootMii allows anything from Recovery modes (creating a practically unbrickable Wii), to lazy access of the Homebrew Channel. For example, if you have corrupted the System Menu, you can use the AnyRegion Changer to install a System Menu 3.2. Unfortunately, all homebrew currently require an IOS, because libogc requires one. However, there will most likely be a homebrew IOS, or a separate recovery application released later.

The BootMii Platform is a boot2 hack, which is loaded by boot1, which is loaded by boot0. boot0 is part of Hollywood and read-only. boot1, although stored on the NAND, is signed by a value in write-once memory and therefore cannot be changed. boot2, however, can be modified. This means it can be hacked, updated, and corrupted. BootMii hacks boot2, and allows running code directly from SD Card, before anything else is loaded. This has many advantages, such as making it very difficult to brick, and slowing Nintendo from blocking homebrew. Unfortunately, the only way we could completely stop Nintendo from blocking homebrew is by patching updates on-the-fly, or somehow preventing overwriting boot2.

The first release of BootMii is should be compatible with most Wiis released before late 2008. Support for newer Wiis (with reduced functionality) will be added when possible.

There is no set release date on BootMii, so DO NOT BUG TEAM TWIIZERS (e.g. MARCAN, BUSHING, ETC.) ABOUT WHEN IT WILL BE RELEASED! BootMii will be released when it's done. It is undergoing a lot of work, and it is being thoroughly tested. If it was not thoroughly tested, it could have dire consequences.

BootMii will not require any special hardware. However, special hardware might help accomplish things that BootMii by itself cannot, such as hardware NAND write protection and isolation from the Nintendo software stack. No such hardware exists yet though.

Nintendo has released a new version of boot1, which disables Bootmii as a boot2 hack. Fortunately, Bootmii can also be modified to work as a replacement for IOS, or as a separate IOS (likely IOS255). See more at Hackmii. Since boot1 cannot be updated, all consoles already manufactured before this update are safe. About 10% of the consoles that ran the BootMii Checker tool have the new boot1.

This is a demo from Marcan about the BootMii platform. This is (a very old version of) the official BootMii. Please read the video description if you are wondering about the hardware on his Wii. 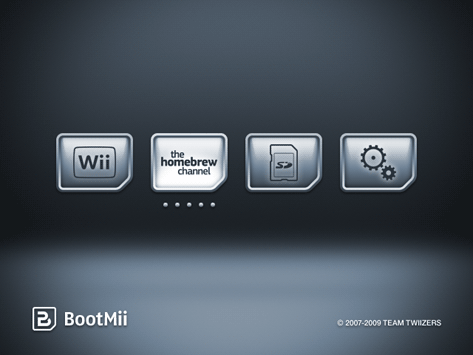 This is a screenshot of a new version of BootMii.