Difference between revisions of "Bluebomb"

Bluebomb is an exploit for Broadcom's Bluetooth stack used in the Nintendo Wii. The main benefit of it is that it can be used on the Wii mini, which lacks functionality used by other exploits. It can also be used to recover from Banner bricks. It takes advantage of the Wii's Bluetooth and injects unsigned code into the system via Bluetooth.

Installation requires a computer that can use Bluetooth and a Linux operating system.

USB is formatted as FAT32
⁃ This cannot be the same flash drive used for your Linux Machine.
A Linux machine
⁃ If you are using a Chromebook, you need to install another Operating System
⁃ If you have a Raspberry Pi, you can use that instead as it most likely has Linux preinstalled.
⁃ Windows Subsystem for Linux will not work as it does not have direct access to the Bluetooth adapter or USB ports.
⁃ If you do not have a GNU/Linux operating system, Linux Mint is the most user-friendly option and can be run on computers running Windows or Mac, and the entire operating system can run without having to install.
- To install a GNU/Linux operating system, simply choose the distro of your choice and install it onto a USB, CD or DVD with programs like Rufus or BalenaEtcher.
⁃ An internal Bluetooth adapter will work.
⁃ If you do not have one, make sure to get one compatible with Linux.

1. Download the HackMii installer from the BootMii website. (If fixing a Wii brick, you can get a boot.elf of whatever app you want to use to fix the brick.)

2. Unpack it and place the boot.elf file in your flash drive.

3. Connect the flash drive to the console. For a Wii mini, the USB port is on the back. For a normal Wii, use the bottom port. (or the right port if it’s upright).

4. Turn on your console and navigate to the settings menu. On the top right corner, you should see a 4-character code like the one in the picture below. This code is your Wii Menu version, take note of this as you will need it later. Afterwards, turn your console off. (If you’re trying to use BlueBomb to recover from a brick, you can assume your Wii Menu version is 4.3.) 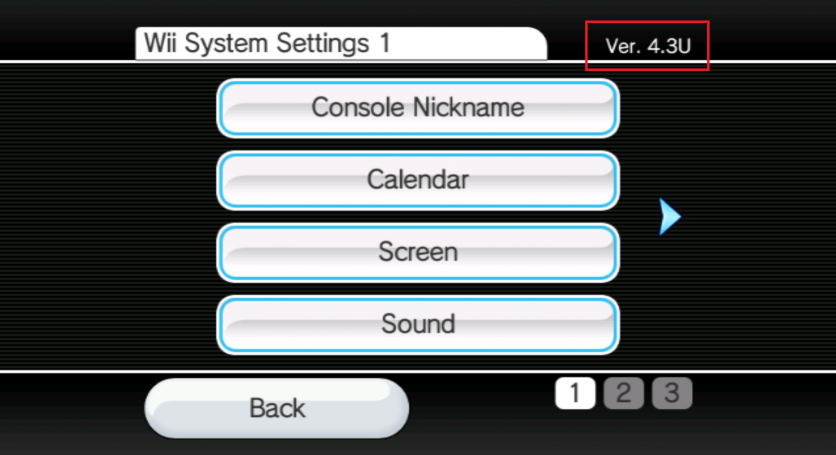 5. Launch your Linux distro and ensure you are connected to the internet.

8. The helper will then download the required files, and ask for information about your console.

9. If you have selected a Wii you will be asked to provide your Wii Menu Version (What you determined in step 4)

10. Turn on your console and do not connect any Wiimotes.

11. Press the Sync button repeatedly until the terminal shows got connection handle. This could take numerous attempts, so don’t give up.

Once the stage 0 code launches, it starts by making sure the packet handler function returns normally after the first part of stage 0 is finished. It then jumps over the byte that gets replaced by the exploit because of the changing of the linked list, and copies itself to an unused portion of memory where other Bluetooth connections won't interfere. After this, it changes the value changed earlier to instead point to a location in the copy of stage 0. The computer now uploads the stage 1 code in chunks, which gets stored in some more unused memory, and when the downloading finishes, it launches stage 1. This is done because the attribute response is limited in space, and there is not enough space for stage 1 to happen in 1000 bytes.

Finally, stage 1 opens the USB and reads the file system for a boot.elf or boot.dol file, usually the HackMii Installer, which is loaded into memory and run.