Downloads codes from the WiiRD Code Database to the SD Card then allows you to select the codes you want to use. Finally, it creates a gct file that Gecko OS or Gecko OS Mod can apply to the game.

If you use another folder, the self-update still sends the new files to "SD:\apps\AccioHacks\"!

Adding codes from outside the app 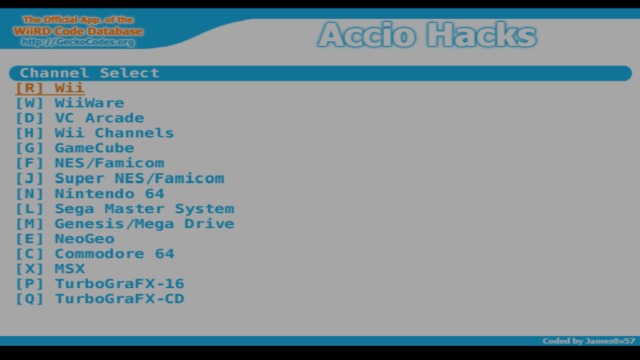 If the total number of characters returned in an online list of available games (per system per letter) is > 8000, none will be returned.
This is very unlikely to happen but it's actually a PHP + Apache bug.
In the event of this very unlikely situation, this affects all versions of Accio Hacks.

If a listing of available games (per system per letter) is > 150, Accio Hacks will probably code dump.
This applies both to SD lists of games and to Online lists and affects all versions of Accio Hacks.
Currently, the largest possible list is 107 games: "[R] Wii - S - (*) Any/All Regions"

There is a 900 code limit per game, the rest are abandoned when the txt file and gct are saved. This does NOT cause crashing.
Games Affected: Monster Hunter 3 (US with 33,215 codes and PAL with 2,919).
Fire Emblem Radiant Dawn (US) is close with 892 codes.
The average number of codes per game is only 59. There are no plans to significantly increase this limit. (enough requests could change that, however)