From WiiBrew
< Wiimote
Jump to navigation Jump to search 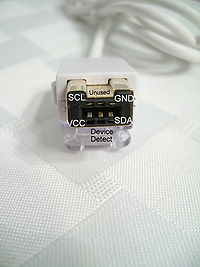 The Wii Remote includes a 6-pin expansion port that allows external peripherals to be connected to it. Communications are bidirectional synchronous serial I2C, and the devices provide a virtual register block of length 0x100 that is mapped at 0xa40000 in the Wii Remote's address space (The 7-bit I2C address is 0x52). Communications are encrypted, as detailed in below. Nintendo has currently released two extensions, the Nunchuk and the Classic Controller. In addition, Guitar Hero guitars and drums also act as extension controllers, although the Rock Band guitars and drums connect using their own system. The balance board acts like a dummy Wiimote with its own type of extension controller. There are also many third party versions of classic controllers and nunchuks.

Wii Motion Plus is mapped at register 0xa60000.

Other extension Controllers are mapped at register address 0xa40000. The data is 0x100 bytes long, and it is mirrored across the entire 16-bit address space up to 0xa4FFFF. These registers are readable and writable. Communications are optionally encrypted, and explicit initialization is required to disable encryption (see below).

In encrypted mode, bytes can be decrypted using the following transformation:

Where table1 and table2 are 8-byte tables calculated based on the 16-byte key sent by the host, and address is the address of the byte being read (only the bottom 3 bits matter). If the host key is 16 zero bytes, table1[x] and table2[x] are all 0x97. The value 0x17 was used previously, which is equivalent. Proof of why any two pairs of table entries a,b and x,y are equivalent if (a^b^x^y)&0x80 == 0 is left as an exercise to the reader.

The calculations should be performed mod 256, that is, truncated to 8 bits (in languages such as C and Python, use &0xFF or work directly with 8-bit datatypes).

If the Wii Remote is initialized using the new method listed below, then the encryption of the extension bytes is disabled and they need not be decrypted using the transform listed above.

The Wii Remote will stream data bytes from the Extension Controller starting at offset 0x08, and continuing for however many bytes the current Data Reporting Mode requires. Data streamed through the Input Reports must also be decrypted using the above transformation if encryption is enabled.

The old way to initialize the extension was by writing the single encryption byte 0x00 to 0x(4)A40040, but that only works on Nintendo's own brand extensions and the GH3 Guitar, and will fail on 3rd party wireless nunchuks and GHWT extensions. If it fails, the 6 bytes will be FFFF FFFF FFFF. With this method you must decrypt the extension bytes to read them.

The values marked with a * are actually already unencrypted, and should not be decrypted. They are given here along with unencrypted version for those wanting to use simplified detection code. You can easily tell whether a value should be decrypted or not by looking at the other values in the 0xa400fa to 0xa400fd region.

The "Partially inserted" condition allegedly occurs when the connector is loose or has a bad connection. Usually, this will correct itself upon full insertion. However, it has been known to "stick" in the partially inserted state rarely. This is a hardware glitch, the fix is to simply disconnect and reconnect the Extension Controller. Third party controllers such as wireless nunchuks also return this value if initialized with the old method, in which case the whole last 16 bytes will be FF.

A Wii Balance Board extension is only found in a Wii Balance Board. Although it exposes functionality as an Extension Controller, they are not separable and this controller is documented separately.