Wiiload is a method of loading .dol and .elf files over the network. Also, you can use Wiiload to install homebrew applications directly onto your SD card. If the icon in the very bottom right of the Homebrew Channel is lit up, it should work for you.

First download the package, which includes all version of Wiiload. Then determine your Wii's IP address by pressing the home button on the Wiimote at the Homebrew Channel's main screen. After that, follow the instructions for your operating system.

Send ShellExtension is a automated installation for right-click context menu and default icon for .ELF in Windows.

Warning! Messing in your Registry is risky, if you mess it up, Wiibrew or I hold no responsibility!

Of course, you still need the system variable set correctly. Works under Vista

Batch file based on the one here: http://www.rgagnon.com/gp/gp-0009.html

With Xcode's Build and Go

wiiload.py is a 42-line python program that can upload files over the network. It is used in the same way as the regular wiiload (i.e. put the IP address in the environment variable WIILOAD and give the the .dol filename and the arguments on the command line).

Wiiload for Android is an Android port of JWiiload. It accepts .dol, .elf, and supports sending .zip to 1.1.0 for installation, and provides a graphical interface. To use it, one opens the app, selects a file, and then hits scan or enters the wii address. Once that is set up, the user hits send and it will be sent directly to the Wii, no PC involved.

Set up a zip file that contains 'only' the folder of the application you wish to install, and inside it must contain your .dol and/or .elf file. Then save the zip file as you see fit, and use Wiiload to upload.

For example, to upload WiiPhysics, create a folder called "WiiPhysics". Inside that folder will be the "boot.dol" file, the "icon.png" file, and the "meta.xml" file. Zip the folder so that you create a "WiiPhysics.zip" file containing the "WiiPhysics" folder and its contents. Then, use Wiiload to upload as described above, or using one of the third-party extensions below.

A Wiiload-based tool by Leathl that allows you to upload via Homebrew Channel (before AND after the 1.0.5 patch). For Windows. 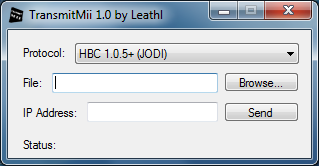 WiiBuilder is a Windows software used for loading Wii executable files (.dol and .elf) from a computer to a Wii with the Homebrew Channel running. A zip file containing an application could be sent too, it must have one directory in the root of the archive containing the boot.elf/dol file. An IP address must be entered in the Settings.

A wrapper for wiiload by Team Twiizers [http://bootmii.org] which allows for loading of dols/elfs/zips directly from Finder. The app remembers your Wii's ip-address and autoboots on drag-'n-drop or when invoked through file association. The bundled version of wiiload is the precompiled osx-binary included in the hackmii-installer v0.5. 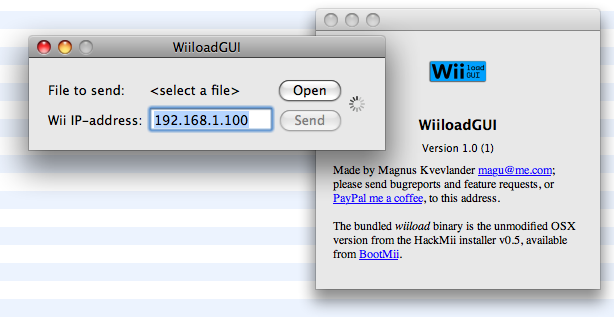 A total replacement for Wiiload.

This is an application with a GUI created by henke37 & R-win to send ".elf" or ".dol" file to your Wii. This is the first screen:

JWiiload is entirely coded in Java. This allows an easy interface that can be run from any OS, so even the average user who isn't using Wiiload in a developing environment will have access to the convenience of the TCP utility. It also has a command line interface mode that can be called, although this doesn't necessarily have to be programmed in Java. JWiiload does not rely on the wiiload binaries, and instead operates entirely independently of them, enabling it to run on any OS that can utilize the Java Runtime Environment. 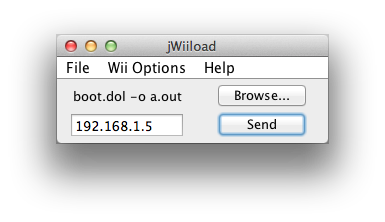 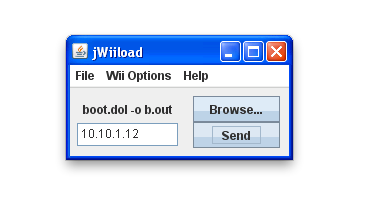 Due to JWiiload being independent of the binaries of regular Wiiload, it has been ported to Android in Wiiload for Android, and can be downloaded from the Android Market.

Third-party Extensions (ONLY compatible with HBC v1.0.4 and below)

WiiTCPLoadGUI is an excellent and easy-to-use GUI front-end for loading Wiibrew over a wireless network.

I have made a straightforward, universal, Pashua and CocoaDialog based GUI available here (this is an esnips page so make sure you have ad blocking turned on). The app is a universal binary and supports OS X 10.3.9 - 10.5.x, the app's installer includes WiiLoad so no other copies are needed to run it. If you have any questions, suggestions or need support refer to the old version's talk page, the FAQ there is still relevant and updated. nliwilson. In the process I created a small icon for WiiLoad that is available here in jpeg format.

You can also use the very simple Python GTK+ GUI made by Mikezila, gWiiLoader.