From WiiBrew
< Talk:Homebrew Channel
Jump to navigation Jump to search 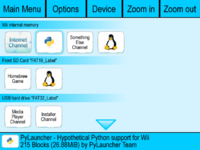 Made a sample UI for navigation between channels on various devices. It's a cross between the Wii Menu and the Photo Channel, each device shows up as it's own little tab in the list and you can move up and down with B button, zoom in and out, etc. Like the Wii menu you can drag-and-drop copy between devices with A + B, and hopefully we could be able to have the preview banners animated similar to that of the Wii menu. KMeist Hax 15:51, 20 March 2008 (PDT)

Additionally clicking the channels would be the same as the Wii Menu, giving the full banner and the back/start buttons (if possible). Also maybe we should have some dedicated copy/erase buttons? KMeist Hax 15:54, 20 March 2008 (PDT)

from the article: "(people weren't happy about the lack of mp3 support in the new photo channel and couldn't go back) "

Since I haven't really put much thought into my ideas, and they are more or less just little blurbs, I decided to put them right here.

Ultimately, either as 'a' WiiBrew channel or launched via 'the' WiiBrew Channel, one of the most useful additions would be to allow the Wii to act as a multimedia device such as Apple's Apple TV. There are several Linux Media Centre UI's such as Mythtv that can run in the frame buffer, leaving all 88MiB RAM free for running code and the media being streamed/buffered. With front SD support, Wii remote support and preferably USB mass storage support as well there is no reason why this should not function as a standalone multimedia device, however if we are talking about utilising pre-existing Linux tools such as Mythtv and one of the Wii Remote drivers then there is no reason not to include Media Extender functionality for those people who want it and indeed plugins for other media streaming software such as VLC and QuickTime. I say ultimately because this would obviously require quite a lot of work, however such functionality is in no way, shape or form an unrealistic fantasy, on the contrary all the necessary source code is out there just waiting for a skilled person or project team to glue it all together. Even if building a Multimedia Channel isn't possible at the moment I personally would just be happy to see a Multimedia mini-distro that could be launched by [Hack Twilight Hack].

Addendum: Having thought about it there's no reason why the functionality people are looking for from a WiiBrew Channel could not be added to a Linux Media Centre GUI, that's kind of the point of open source software. the further thought occurs that as a Media Centre GUI would include photo viewing, slideshows MP3 playback Etc. it would render the Wii Photo Channel redundant. Therefor it may be possible to add such a channel by identifying it as a Wii Photo Channel update in much the same way [Hack Twilight Hack] identifies itself as a Twilight Princess save file, since Nintendo are unlikely to provide more than 3 - 4 more Photo Channel updates within the Wii's product cycle identifying a WiiBrew Channel as say Photo Channel 6.8 would allow it to be copied form an SD card, just as we copy Twilight Hack from an SD card now. should anyone want to revert to an all standard Wii or indeed should Nintendo block any such WiiBrew Channel via a firmware update a user could simply re-download the last real Photo Channel update/version that they paid for free of charge.