DiiLC is a simple application to download and insert the DLC (downloadable content) or HDLC (hacked downloadable content) into Animal Crossing City Folk savegame file (use Waninkoko's savegame extractor for extracting savegame file). This application searches the DLC and HDLC files from the distributing servers. It could download and insert four DLCs (for US, EU, JP, and KR regions) and one HDLC that are available at the time when the application is running. It will process item, design and associated chosen letter from the downloaded file (either DLC or HDLC). User could choose to directly store the letter with item or design pattern into either the chosen player pocket and design slots (including global design slot in Able Sister's shop) or ask Wendell and Pete to deliver those.

DLC is no longer provided by this tool but will be provided via RiiConnect24. 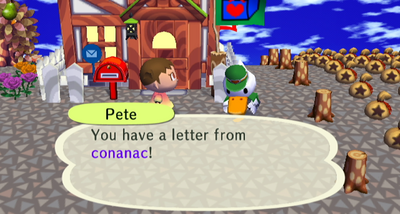 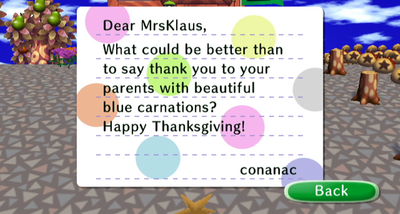 Letter from conanac with a present 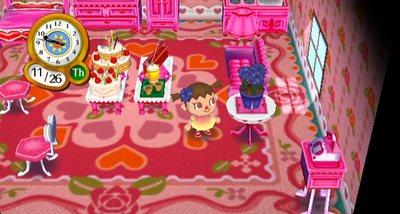 This application follows a similar mechanism for getting DLC in the game. This means that each character has to receive the letter/present from Pete (and has to receive the design/pattern from Wendell as well before Pete could show up for the letter/present), otherwise the town will not be ready for the next DLC (when it becomes available). Below is a set of pictures to show an item HDLC being distributed by Pete in the game. Furthermore, two example videos could be seen below to show: (1) Wendell and Pete delivering foreign DLC design and item; (2) Wendell delivering HDLC design.

If the designated area of the savegame file has already contained other DLC or HDLC, this application gives such an information, and automatically replaces that DLC/HDLC with the one that has just been downloaded. For each DLC/HDLC being inserted, users could see the name and corresponding hexcode (in square brackets) of that item.

In case you miss the distribution time of any DLC/HDLC, you could use EZ_DLC_Install tool (PC application maintained by DsPet) that is regularly updated to include all distributed DLC/HDLC.

At the beginning when running this application, the users could choose one of three actions by pressing a button on Wiimote:

Once the choice is made, the application will simply run and provide information along the way and then exit by itself. Then users could use Waninkoko's savegame installer application for installing the file back from SD card to Wii.

To change the directories and filenames for savegame and temporary files, a file called dlcsetting.xml is automatically created in the SD card main folder (unless the right version is already there). This setting file also allows user: (1) to choose which letter she or he wants to have from each region; (2) to choose whether to store the letter plus item or design directly to pocket and design slots of chosen player or Able Sister's shop global design slots, or to ask Wendell and/or Pete to deliver those (and this by default to all player).

It has the following default content (user could change it using any Wii homebrew text editor or PC text editor application):

By default the four regions' DLC letters plus items are stored directly to the first four pocket slots of the first player in the town, and the designs from those regions (if any) are stored directly to the the first four global pattern slots in the Able Sister's shop (shown as umbrella in the center of the store). And HDLC letter plus item is chosen to be delivered by Pete, similarly HDLC design (if any) is chosen to be delivered by Wendell.

Starting in version 1.2, IP addresses for both hdlc and dlc distribution servers could be set in the setting file. Typically, a user does not need to change this unless the distribution servers change them. If that happens then you could find the new IP addresses by using ping command to the corresponding server names (google is your friend for learning how to use such a command). Or in general, ask or post your question in the discussion page if you have problems when running this application, and I could try to help.